BackyardKit is reader-supported. When you buy through links on our site, we may earn an affiliate commission. Learn more

Are Radar Detectors and Laser Jammers Legal or Illegal in Florida

The simple answer is that Radar detectors are only legal in private vehicles in Florida. However, the radar detector must not be mounted to the windscreen.

Using a radar detector in a "commercial" vehicle is illegal.

Interesting fact: If you’re caught with a radar detector in a commercial vehicle you can be given a ticket even if you’re not over the speed limit.

Radar detectors are also prohibited in any type of vehicle on military bases throughout the country (including Florida).

What is a Commercial Vehicle?

The federal definition of a commercial vehicle is quite interesting and can catch you out if you’re not careful. It includes:

You need to keep in mind that the definitions shown above are based on the maximum GVWR and a vehicle doesn’t have to be fully loaded for it to apply. Some heavy-duty pickups fall into this category!

Our recommendation is that if you are a professional driver, you should avoid using a radar detector in your vehicle to avoid the risk of large fines and license suspension.

No matter where you’re driving within the United States, federal laws apply.

Section 392.71 of the Transportation Federal Regulations specifically refers to using and possessing a radar detector in a commercial motor vehicle.

It is important to note that section 392 applies to commercial vehicles and that this regulation doesn’t apply to private vehicles. It also doesn’t mention jamming devices or laser detectors.

There are no specific laws or statutes in Florida that relate directly to radar detectors.

The use of a radar detector on military bases is strictly prohibited throughout the United States. 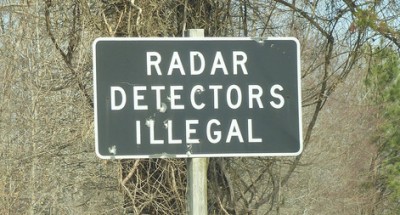 This is not normally a problem as most bases have a checkpoint before you can enter. The security personnel usually request drivers to unplug and remove radar detectors from windscreens or dashboards before passing through the checkpoint.

If you refuse to remove the radar detector, you will almost certainly be refused entry to the base.

The other thing you need to think about is how you intend to mount your radar detector.

Even though it may be legal to own and operate a radar detector, almost 70% of states have made it illegal to attach anything to a windscreen that may obstruct the drivers vision. (This includes Florida)

The main reason for the law is because suction cups often fail and when they do, the radar detector will fall from the windscreen and end up around your feet. When you combine this with the attached power cables, it presents a real accident risk. Even when the devices are attached to the windscreen, the loose power cords can often get in the way of the driver.

While some states restrict the rules to devices attached with suction cups, others have rules based on the location of the device (directly in the drivers line of sight) or its overall size and weight.

(2) A person shall not operate any motor vehicle on any public highway, road, or street with any sign, sunscreening material, product, or covering attached to, or located in or upon, the windshield, except the following:
(a) A certificate or other paper required to be displayed by law.
(b) Sunscreening material along a strip at the top of the windshield, so long as such material is transparent and does not encroach upon the driver’s direct forward viewing area as more particularly described and defined in Federal Motor Vehicle Safety Standards No. 205 as the AS/1 portion of the windshield.
(c) A device, issued by a governmental entity as defined in s. 334.03, or its designee, for the purpose of electronic toll payments.
(d) A global positioning system device or similar satellite receiver device which uses the global positioning system operated pursuant to 10 U.S.C. s. 2281 for the purpose of obtaining navigation or routing information while the motor vehicle is being operated.

Windscreen mounted radar detectors are especially easy for enforcement officers to spot when they’re looking at your windscreen, so the chances of getting a ticket are quite high!

A lot of law enforcement officers may turn a blind eye to windscreen mounted GPS devices. However, because radar detectors are designed to avoid law enforcement, they more likely to issue a ticket for them. 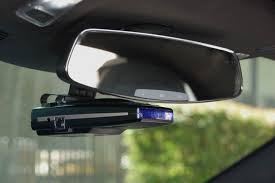 If you intend to use a radar detector, you will need to mount the device to a sun visor or on the dash.

Even though radar "detectors" are legal, radar "jammers" have been highly illegal in all states under federal law since 1996.

Radar Jammers are transmitters tuned to interfere with (“jam”) a radar signal. The intentional use of jammers is considered “malicious interference” and is strictly prohibited by the Communications Act of 1934, as amended, as well as by FCC Rules. Anyone using a jammer risks such penalties as losing an FCC license, paying a fine, or criminal prosecution.

Section 333 of the Communication Act of 1934 states

Willful or malicious interference. No person shall willfully or maliciously interfere with or cause interference to any radio communications of any station licensed or authorized by or under this Act or operated by the United States Government.

Radar jammers or scramblers work by modifying or interfering with the signal that bounces off your vehicle before it returns to the enforcement officer. Some jammers do this by overwhelming the police radar gun and other change the Doppler signal or scatter the signal.

If you are caught with a radar scrambler or jammer, you could end up facing a felony charge and be liable for a large fine and/or jail time. The use of a radar jammer is a federal offense and also violates FCC regulations. The fine for a second offense can be as much as $10,000 and up to two years in prison. Even a first offense is up to a year in jail.

Laser jammers (vs laser detectors) are not banned by federal law.

A laser jammer works by detecting the laser light from a police laser gun. It decodes the signal and transmits bursts of invisible light back to the sender. When the light is at the right frequency and pulse rate, it confuses the laser gun and stops it from displaying your speed.

While radar jammers are banned by the FCC because they can cause serious issues for aircraft navigation, police radar equipment, and other radar controlled devices, laser jammers are a lot less disruptive because they only transmit stray beams of light to interfere with the incoming signal.

You should always keep in mind that laws vary from state to state and if you live near a state line or travel interstate the laws may be different from your home area. This means you can easily break the law without realizing it.

This is especially true if you travel through Washinton D.C. or Virginia. These states have a complete ban of radar detectors (even in private vehicles) and they strictly enforce the ban.

References:
ref 1. Note that this article is expressing an opinion as to the legality of radar detectors and is not providing legal advice. I am not a lawyer and this is not legal advice. Laws can change over time so please do your own research.

Garrett Ace 250 ($233)
It will hold its resale value and will serve you well for years to come.